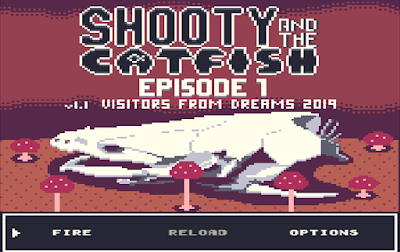 You play Shooty (because he likes to shoot things) and the catfish Zaat, a sort of adventuring duo hired to do odd jobs no one else wants to do. Your boss, Slim Grim the floating skull, sends you to check out what’s going in the mines in the next town over. 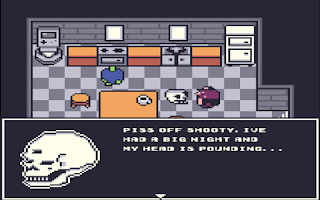 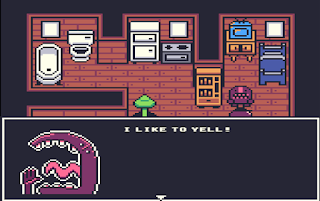 I like the premise of being hired problem-solvers, and there is a mystery as to what’s going on in the mines, but it failed to hook me. There are also a lot of NPCs you can talk to that don’t add anything to the story. They’re humorous, but after talking to a few of them and not learning anything new, I grew tired of the inconsequential conversations.

Each of the characters has their own personality and is very recognizably different from the others.

The writing is fairly decent and humorous, but there are quite a few typos.

I like the unique tileset the developer used, but it seems rather limited. Every interior scene has a lot of similarities. It also seemed odd that the NPCs didn’t walk around on the map. 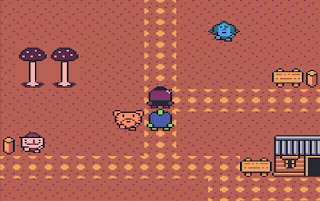 This is the high point of the game. While I’m not a fan of the style, everything looks very unique, and each character is custom-designed.

Most of the creativity here is in the art style. I do like that the battle system includes a skill called Diss and that it actually does damage instead of simply acting as a debuff. Who says words can’t hurt you? 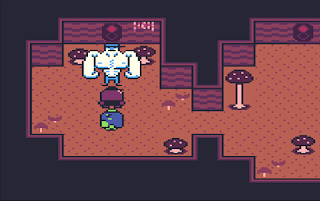 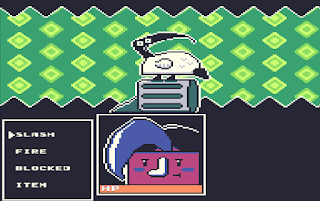 I enjoyed finding new gear and gaining new skills, but other than that, exploration and battle didn’t really motivate me to keep playing. The battles, boiled down beyond what the skills were named, weren’t any different than most RPG Maker games, and there was never a danger of me losing a battle, so I didn’t feel challenged in any way.

The game runs well but doesn’t stand out as doing anything exceptional in this field. It would be good to see the game use a custom icon rather than the RPG Maker MV default.

There’s a blend of music in the game, from techno to mysterious ambiance. There are some screens, however, that don’t have any music at all, which left me feeling like something was missing.

There aren’t many sounds in the game, and what’ s there isn’t anything special. There are also some sounds that don’t match the action they accompany. For instance, a character vomits in the bar, but the sound is pleasant, like you just opened a treasure chest or something.

I realize this review is coming off on the negative side, but that doesn’t mean this is a bad game. If you’re a fan of the art style and lean more toward casual gaming with a fair dose of humor, I would encourage you to give Shooty and the Catfish a try.