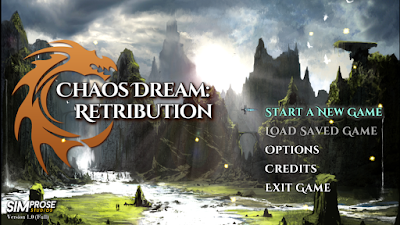 You are Grigori, son of the late local blacksmith. The Darklord Crix cursed your family, and now, it’s up to you to go get your revenge and break the curse. 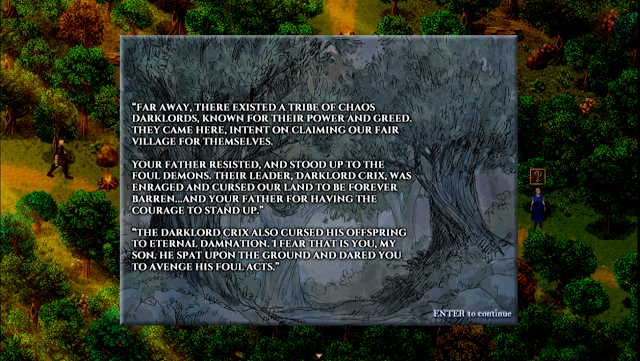 I was interested to hear more about who Darklord Crix was, but nothing else about the story caught my attention. There are a couple of quests early on that are meant to move the story forward, but they didn't hook me.

The characters I meet were varied in the appearance, personality, and voice. In my First Impression review, however, I didn’t see much of their backstory or have any other real interaction with party members after I recruited them. That made it difficult to connect with or feel an attachment toward any of them.

The writing isn’t bad. Typos are kept to a minimum and all the descriptions of items, skills, etc. are easy to understand. The language the characters use is rather formal, in keeping with the setting of the game. It was a little over the top for me, but others might enjoy it.

The scenery for the maps adds to the realism of the game. I would have preferred to have the enemies portrayed on the map in a different way, though. As it, every campfire you see burning is actually an enemy. Whereas I like to see where the enemies are, it would have been better to have sprite characters for them or let them come up as random battles. In fact, there are random battles, making the “campfire” enemies seem unnecessary.

There were also some paths I couldn’t walk down until I needed to. There was nothing in my way. My character didn’t make an excuse for not wanting to go that way. I simply couldn’t walk to the next map in that direction until the game was ready for me to.

Along the same lines, some bushes only appeared when a quest to gather them started and made broke the immersion of the game.

The graphics are impressive and keep a complementary style in every aspect of the game. The art style definitely helps the game stand out among other RPG Maker games for its realism. 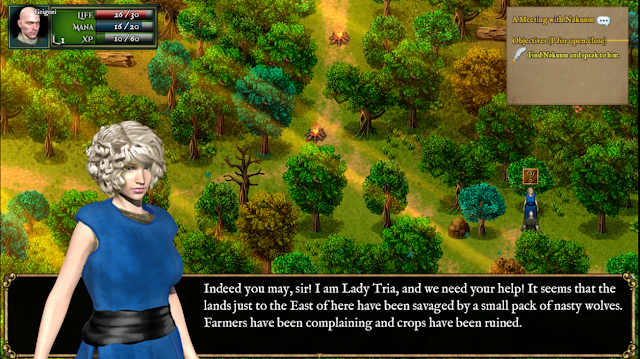 SimProse Studios has included some interesting mechanics in the game. One is the ability to change out equipment while you’re in battle. Another is the possibility for your equipment to break. Being that your character is the son of a blacksmith, this makes a lot of sense. It also adds a lot of realism to the game.

You can also gather a party, and when you select one party member, you can’t select the other option presented to you, so it feels as if you’re making choices that matter. Wanting to see what the other possible party members are like also adds to the replay value of the game.

The pace slowed down for me in the battles. It seemed like I or the enemy missed or dodged about half of the time, which only served to drag out each encounter. The best way to hit them was with a Spell.

Other than that, I enjoyed the game and found it to be fairly engaging. I did appreciate how challenging the battles were. Gearing up, using items, and recruiting party members were definitely necessary for me to complete the first quest.

Chaos Dream: Retribution makes subtle use of plugins and/or code modifications that add to the game’s appeal. If you have an older computer, be aware that it may lag a bit as the game loads new graphics or voice sound files. 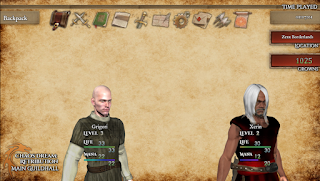 The music is varied and appropriate for each scene. I can’t say that any of the tracks would stick in my head, but they were pleasant to listen to.

Chaos Dream: Retribution shines in this department. Some conversations are voice-acted, and there are plenty of custom sound effects to complement the action, such as when an enemy or character gets hit, or the ambiance behind the music.

The only reason I’m taking points off here is because the voice-acting is inconsistent, meaning you never know when you’re going to get a voice-over and when you’re not. And there were some instances that I thought warranted a voice-over, but it either wasn’t there or didn’t load, such as when I found an important person I was looking for.

I’m impressed with the visuals of the game and expect the story to get more interesting as the game continues. If you’re looking for a more realistic-looking RPG and don’t mind the slow battling, try Chaos Dream: Retribution.