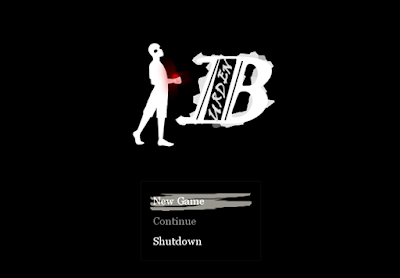 You start Burden RPG with a beating heart in your inventory. Your son is either missing or dead, until he shows up through the world in your basement. And he wants to play… 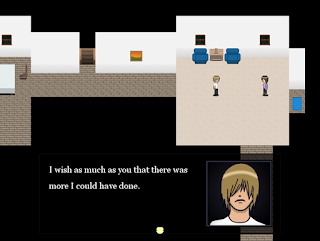 I actually played through to the end of this game. It was that engaging! There’s plenty of mystery, and the story comes to a satisfying end. There’s a part near the end in which you can make a decision. It’s worth it to save and reload so that you can see what happens with each story path.

There isn’t much characterization in this game. You have Dad, Mom, and a host of creepy kids. But none of them show much personality. The game relies more on the general storyline and the puzzles.

The writing in Burden RPG is excellent. It’s clear, moves the story along, and is interesting, with no errors.

The maps are fairly simple. At the same time, they’re varied in appearance, and the dev has used them to create a sort of maze. so I won’t complain about them too much. The flickering lights are a nice touch. 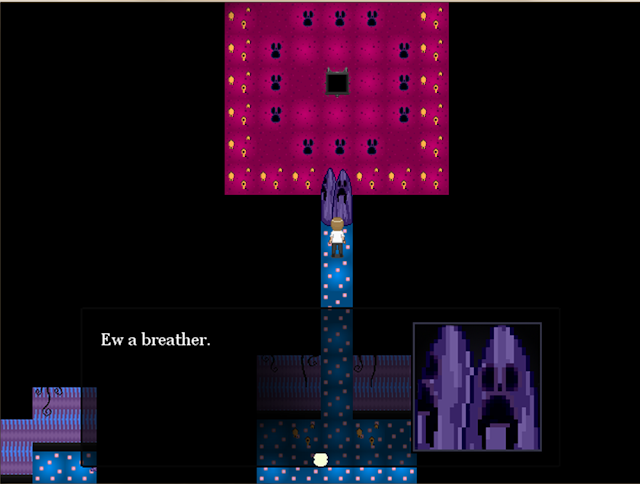 I appreciate the custom character art. The style fits well with the theme of a young family. 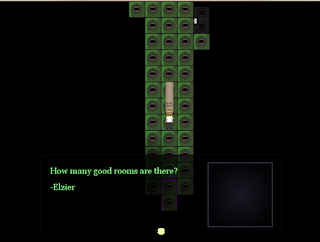 Most of the game is built around exploring and solving puzzles, which, along with the horror aspect of the game, was a nice change of pace from many other RPG Maker games I’ve played.

There is a section of the game in which you have to solve a series of puzzles to progress. Each puzzle is given by a different person. The puzzles are fun and challenging, but I wish there was a way to remember who gave me which puzzle, or to remind me what the puzzles were. In other words, it would have been nice if all the NPCs repeated themselves until I completed each of their quests.

There are also a couple of puzzles that give you no clue as to how to solve them, such as a moveable rock and a hole in a wall. The only way to find them is to walk into the walls.

Other than that, gameplay was smooth and enjoyable.

Burden RPG runs well with no glitches. I’m not familiar enough with the VX system to recognize any changes the dev made. I did notice that there’s a place for a portrait in a lot of the text boxes that were left blank when no one in particular was talking, such as when the system narrates for you what you’re looking at. It’s probably VX default to keep that blank box there, but it would have been a nice touch if the dev could have found a way to get rid of that portrait box when it wasn’t being used. 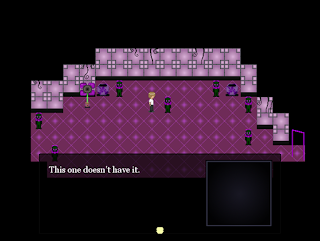 The music is deliciously creepy, suspenseful, and well-composed.

Most of the sound effects are very realistic. They’re well-placed and give the game a deeper sense of immersion.

If you don’t mind horror, love a good story, and want to exercise your brain a little, play through Burden RPG!