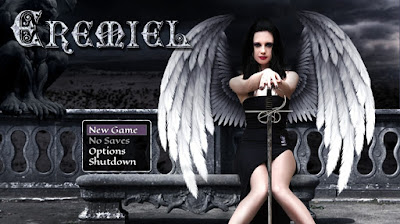 You’re the angel Eremiel, sent to find out why souls aren’t coming to Heaven after their time in the Abyss. 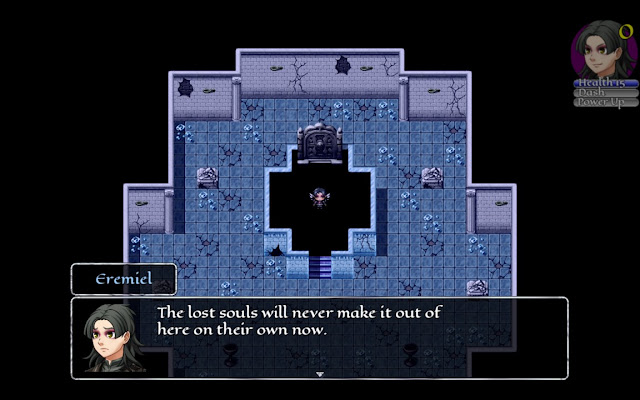 The story seemed interesting. Unfortunately, I didn’t get to see much of it.

There’s only one main character, Eremiel. He seems to be doing his duty with a godly heart, but there’s nothing that makes his personality stand out.

The writing is great. It’s clear and moves the story along as you talk to spirits whom you rescue.

The few maps that I saw were very well laid out. They had interesting shapes and were full of scenery.

I like the title art, but I didn’t get to see if it had anything to do with the game. Is it supposed to be Eremiel? Is Eremiel a female angel? Is it a female demon who is the reason souls are being trapped in the Abyss?

The rest of the art is RPG Maker assets, and Frogboy has used them well.

Eremiel shines in this category. All of the combat takes place on the map screens. It’s action combat as you shoot holy energy and use power-ups on enemies as they approach you. The power-ups change your attack in a variety of ways. The best is when you can snag an area of effect ability. Others boost your health.

There’s also a HUD to tell your health, money, and time remaining to use your power-up.

At the beginning of the game, you can choose between three difficulty levels. More on this in the next section. 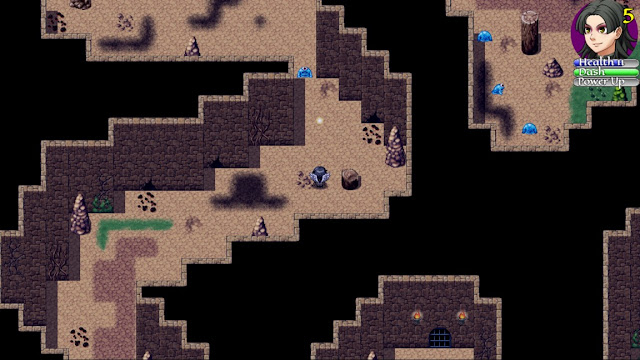 Here’s where Eremiel falls short for me. I love that the game uses on-screen combat. I love the idea of rescuing souls as an angel serving the Lord. Unfortunately, I did not get very far with this game. I had it on the Easy difficulty level and found it far from easy. I couldn’t even get past the second enemy map! If that was easy, I’d hate to see what Insane is like.

I might have given myself a few more tries on the game if I could save it after the first map, but there’s no menu screen and no way to save until you reach a checkpoint.

Frogboy has done a really nice job of making a smooth gaming experience that utilizes the plugins he needs to make an on-map action-combat game.

Most of the music is RPG Maker, which is fine. It’s catchy and sets the mood of the game. There were a couple of maps that didn’t have any music though, and sounded empty.

The action on the maps had appropriate sound effects. As I say on all my reviews, a great step would be to add voice acting for the dialog sequences, but that’s really going above and beyond for an RPG Maker game.

If you’re up for a challenge, play Eremiel. You might enjoy the arcade-style push to get through the waves of enemies more than I did. It certainly seems that it would be a rewarding story to see the end of if you can get that far.