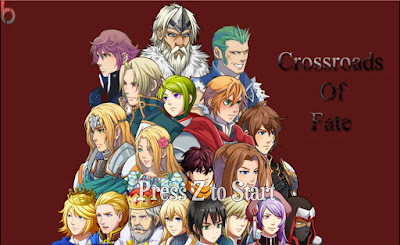 You play a young man or young woman training to be a knight.

The character says that he has no reason for wanting to become a knight. With no motive, it’s difficult for the player to invest in the character’s story. From what I saw in my short time with the game, the story was an uninteresting progression of earning your way into the knight training program.

There is an intro scene that hooks you, though, and could provide some interesting plot points later in the game.

Again, the character has no motive, so it’s difficult to connect to him/her. The only personality trait the character shows is a bad attitude. Other characters are likewise flat with seemingly no reason for doing what they do.

There is some humor in the game, which I appreciated. There are also quite a few typos, which detract from the storytelling.

The mapping is generally very nice. To leave a map, though, you have to step on the same square on which you entered, making it awkward to peek into a map, then leave again. You have to take a step forward, then turn around. It’s better to have the character enter the map a space in front of the exit tile. Then, they can simply take a step back if they want to leave instead of a step forward, then a step back. 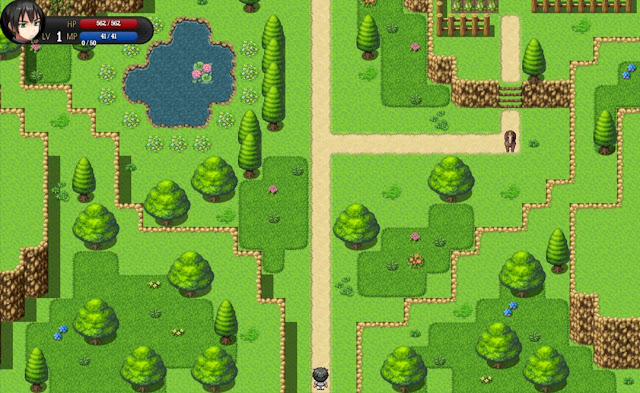 All of the art that I saw was made with RPG Maker assets and the Character Generator. Most of it was well put together and fit the mood of the game nicely. The only problem was with the scale of some of the enemies.

I can’t say that I saw anything different about Crossroads of Fate. It seemed to be a standard RPG Maker game with the standard mechanics and presentation.

Most of the game plays as you would expect, but the battles are a little ridiculous. There’s a point where you have to fight 4 opponents, one right after the other. Nothing wrong with that. The problem is that they’re supposed to be your peers, and yet they do not match your level at all. They have super powerful skills (you have none), and their attacks are incredibly weak compared to yours. It comes down to whether you can buy enough health potions and swing enough times between chugging said potions to defeat them. It makes the whole scene very tedious rather than challenging or fun.

Once you get one of them in your party and take her into battle yourself, her powerful skills are no longer available. 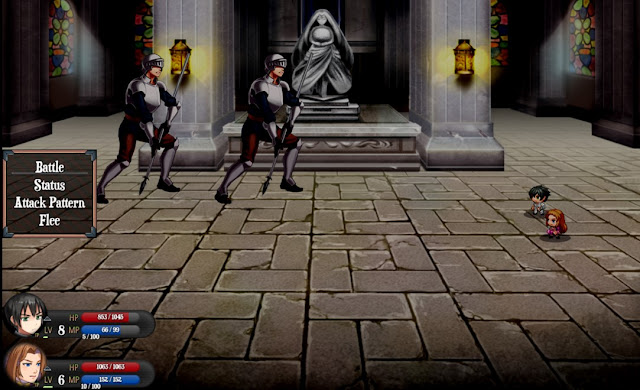 The game did crash one me once, but ran smoothly otherwise. I’ll also take a point off for the map transfers I mentioned above. That would be easily fixed by choosing a different tile for the character to enter each map on.

There is a HUD for you to see your health, and normally I would like this feature, but in Crossroads, it’s unnecessary as you don’t take any damage on the map and therefore don’t need to track it outside of battle and the main menu. Other plugins, however, do change the look of the game slightly and aid in setting it apart. 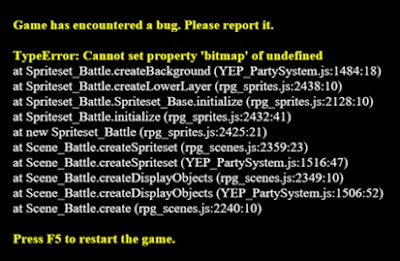 I like a lot of the music blacksred Empire chose to use, and there are quite a few pieces even in the beginning section of the game I played. I’m not sure it all goes together, though. There’s no overall cohesion to the musical selection, so the pieces seem a little haphazard.

There are very few sound effects in the game. The developer seems to rely more on visual events and the music.

I think Crossroads of Fate could be a very interesting game if blacksred Empire does some work on helping us get to know the character more and provides a compelling reason for why he/she is entering the knighthood. Other details, such as evening out the battle system, fixing the typos, and adding sound effects to the game shouldn’t be difficult to do.