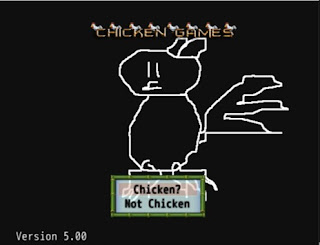 As the screenshot says, you can play a variety of games involving chickens. Sometimes, you’re trying to help them escape. Other times, you’re roasting them with fireballs or avoiding them as they run toward you. 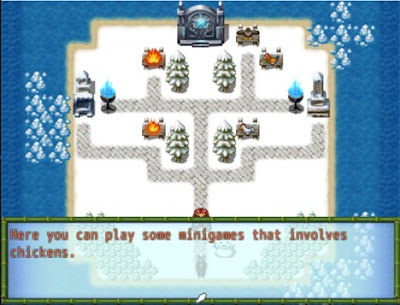 There’s no story to the game, and very little dialog. It’s simply very fun mini-games in a classic arcade style.

There are some quirky characters, such as the snowman who hops around the game hub, but again, the game doesn’t focus on character development.

The writing provides clear instructions on how to play the game. There are a few grammatical errors, but they don’t detract from the enjoyability of the game.

The Chicken Games maps get the job done, but they’re not particularly elegant or visually appealing.

All of the artwork (well, except the title image) looks very nice in-game.

This and the next section are where Chicken Games really get the kudus. The activities are similar to classic arcade-style games, but Lanthanum Entertainment has managed to pull off the feel in an RPG Maker environment. They’ve also included power-up items that significantly change the gameplay.

If you enjoy arcade games, you can spend hours mastering Chicken Games. And there are plenty of achievements you can earn. Have I mentioned how fun and well-programmed this game is?

Lanthanum Entertainment has kept a simple interface and gameplay, but with just the right number of plugins and game alterations have developed a very fun experience based on a wacky theme.

There’s not much variety in music, but what’s there is catchy. It’s all base RPG Maker assets.

Chicken Games could incorporate some more sound effects, such as when you send a chicken running or when you sidestep a chicken, to make the game even more lively.

If you’re not looking for a serious RPG but rather a fun arcade experience, try Chicken Games. Chances are you’ll enjoy it as much as I did.